When people write music, poetry, or even an OpEd piece in the New York Times, it seems there are multiple meanings, levels to take, places to go in your mind with the author of the poignant words. Even in an age where media boils everything to a mere sound bite, you might see one interpretation on page one and another on page twelve. It's the world we live in, and it's okay because people need the ability to say things in as many ways as they can. Expression of opinion still gets some in trouble, but if an opinion is woven into the lyrics of a song, it might speak without pointing a finger back to the person speaking.


I found an article about Rihanna's new number one song -Work- and how several lines of lyrics might mean this, or it might mean that (http://www.bustle.com/articles/144161-rihannas-work-lyrics-have-a-double-meaning-that-you-dont-want-to-miss) and I was thinking back to the recent Super Bowl 50th Half Time Show and Beyonce. I saw a beautiful lady singing a powerful song. I didn't see the music video until later. I didn't grow up with the stereotype a dark skinned woman or man in the United States has to experience everywhere and anywhere. I didn't sense how powerful the song or the moment or the music really was. I'm not sure Work by Rihanna creates a sense of multiple meanings or inspires a generation of people like Beyonce did, but I know that musicians continue to use the lyrics, and video and performance of their songs to point out things in the world around them that need a spotlight.

Whether you agree with Beyonce, or you think she's pushing buttons she shouldn't push, she's aware she has a voice, she's aware she has a place in the world in her NOW and she's going to use it to enunciate something significant. I grew up in a FREE United States, where the freedom to voice opinion still gets protected and someone like Rihanna or Beyonce has the right to share whatever might be of value to them.

I pray that people find peace, love and joy to share, and the anger and the hatred and the negative energy gets put away forever. I know it's one of those dreams that people dream and one of those things that feels near impossible. I also know its one of those topics hard to even understand if someone lives in another country, other than the US. That's alright. There are many authors in many nations making many points at any given time. May their voices be heard, and may yours. 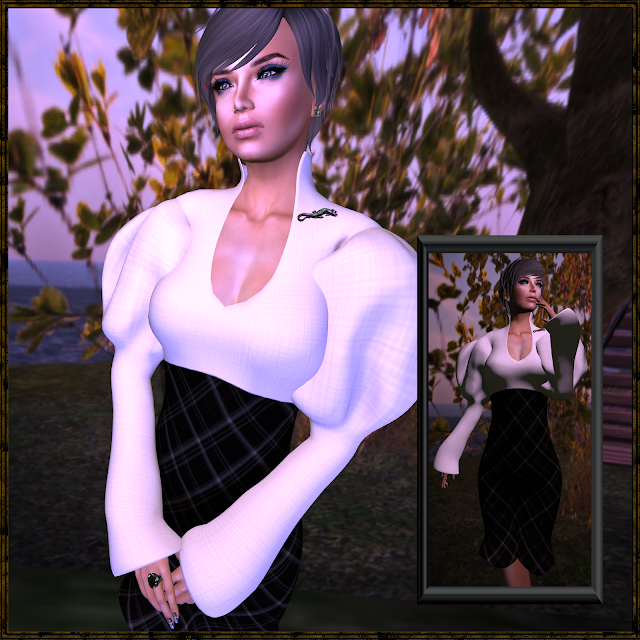 This gorgeous Steam Futura dress with volume in the construction comes from !Lyrical Bizarre Templates! Steam Love Collection. Jewelry pieces are each from Chop Zuey, all pieces that originally were designed as Chop Zuey Mens pieces. I love using the chunkier bits and bobs from Chop Zuey when I have on a bigger bolder design like this dress. The Razors Edge Earrings, the Crunchy Salamander Brooch and the Midnight Express Ring are each examples of the tremendous options available from Chop Zuey that suit a man's OR woman's style. Loads of designs from Chop Zuey womens and mens items tend to be gender fluid. Speaking of gender fluidity, hair styles from a variety of designers fall in that category as well including this new style from Hairology February /Wasabi Pills/. Most of the time, I use a red or dark brown look, the color of my hair when I was in my early 20s. However, I'm one of those early grey girls and I had silvery highlights from the age of 25 onward, so tonight, I share a color option far closer to my reality. I love the silver grey tint on women or men.