Beauty abounds at Ferosh Fashion Week with another great piece from Lyrical Bizarre Templates. This is Shaz III, part of a collection of new designs released especially for this event. 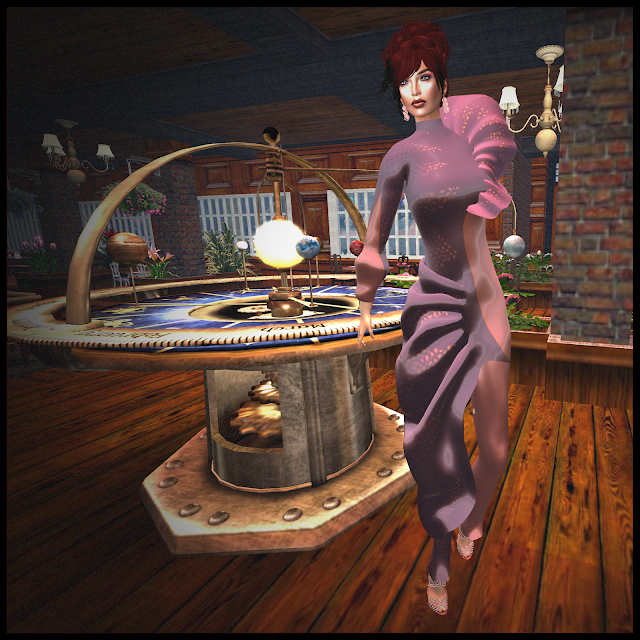 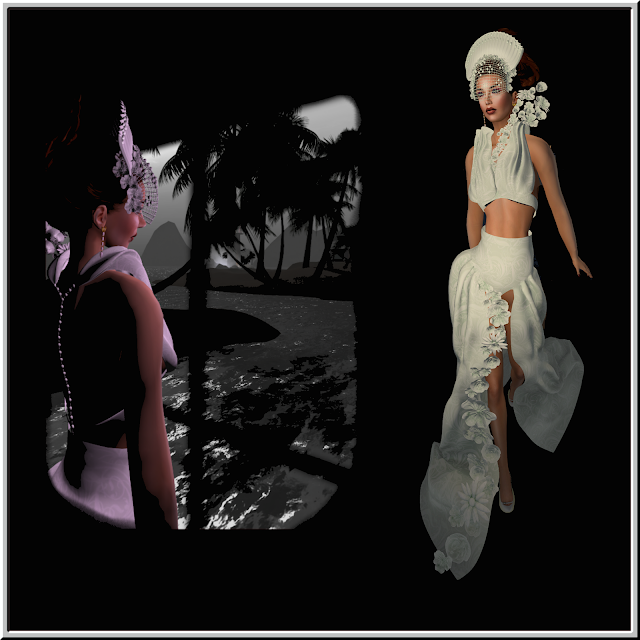 One of the many lovely new releases by Lyrical Bizarre Templates is this top and skirt with intricate details added for a refined beauty. The headpiece, flora around the top and flora around the skirt come separately. In the fabric itself, the skirt reflects the flora design subtly. Pieces can be worn to adorn other outfits as well. It's a gorgeous start to a new year. This outfit was created for Ferosh Fashion Weekend and kicks off 2016 in high style.

Could you imagine this happening at your wedding? I watched this several times this morning when I came across it on my infinite list of song choices YouTube now provides if you click "Auto Play" option. I began with Pharell's Freedom and fourteen or fifteen songs later, I landed on Maroon 5's Sugar.

Adam Levine tells the audience that it is December 6, 2014 and he's going to drive across L.A. and hit every wedding he possibly can. Why? Because he's Adam Levine with Maroon 5, and he knows that if he visits these weddings, it will be snapshot moments of many others' lives, places and times where he can and does affect positive energy.

The various weddings showcase surprise, joy, wonder, speechlessness, and so much more. When I watched, I had to start the video over several times to really see and feel every one of these moments, and thus, Maroon 5 also transformed my life and energy in a positive way, over a year after the video was filmed, and I'm sure it's still creating positive energy for anyone else who stumbles on to it, hopefully affecting some of you also!

This video reminds me that everyone has the ability to shift the energy in the world around us. It's a message that comes across to some degree in the Star Wars franchise, with -The Force- measured by which side you choose. I'm a firm believer in the energy we exude. If we're exuding positive energy, we have the ability to shift others' energy around us in a positive direction. By the same token, if we exude negative energy, then we affect others in an equally negative direction.

How many times have you begun a day feeling very positive about life, about your dreams, your goals, your achievements, then had one conversation with someone, at work or on Facebook, or some other where that holds value to you, OR even scarier, somewhere that doesn't hold value to you and you still let -The Force- of that person or conversation hold value in a way that sways your perspective.

One minute you were feeling very up about the world and the next, very down. It happens more than we like to admit and we give people we barely know the power to influence our energy, the core of our emotions, the who and what we are. When I put it like that, I want to shake myself and say, "Don't do this!" and for a little while, I'm cognizant, avoiding pitfalls, avoiding the dark energy of -The Force- especially in situations where I'm not even emotionally invested.

Make the choice to absorb the positive energy. It can come from strangers or friends. If you participate in the vast world of virtual reality, virtual friends on virtual friends lists, Facebook or Second Life, choose wisely what you take in, because our minds really do vacillate easily between moods, positive or negative, and even in the most mundane moment, the most common shared this or that, a keystroke or a word makes all the difference. You could end up shining like a star or hiding under a rock, and the change could happen before you even know you're vulnerable.

We don't all have the star power that Adam Levine has, however, we do have the power and energy within us, -The Force-, to make a difference in a life or lives and with that power should come responsibility. I hope that you find a way or many ways to impact your world with the positive things that build others up and in turn elevate your mood. You'll be more useful to yourself, more adequately equipped to handle your day and in turn, you'll be more successful. It's a win-win-win as they say.

This outfit blends items from several stores that all had that brick red hue as the base color. The jacket from EccentriXi paired with the halter and skirt from Rowena Springflower Design looked as if they were designed to wear together. The boots from Pizazz were also that deep red tint, fitting well with my overall styling. With a filter on my photo, I went for a vintage look, two tones display the rich deep tints perfectly. Photo snapped at Image Essentials 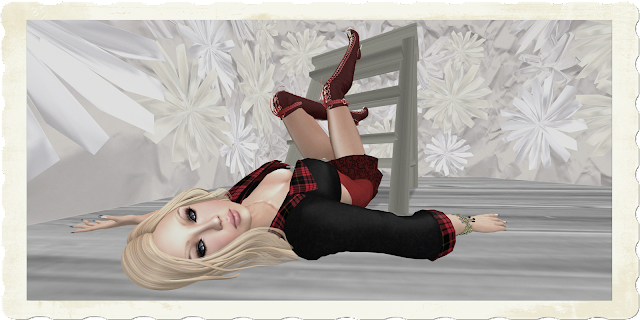 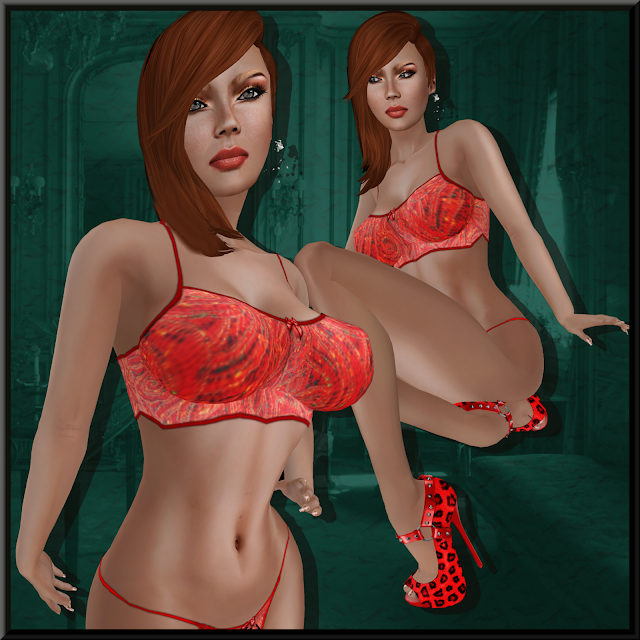 Something sexy.
Something fun.
Something from my boudoir.
I love the new Slink hourglass body. I actually like several of the mesh bodies that came to fruition while I was away last year. 11 months is a VERY long time in SL years. It ages more quickly than dogs do. I own three bodies but I've only used the Slink because it has the most applications for what was already in my inventory and what's being produced by the people out there doing the designs in the greatest quantity and quality that I've yet seen. I could be corrected and learn more and new tidbits tomorrow, however, so stay tuned. I could love Eve and Maitreya equally as well, and just not have a great deal of exposure to them yet.

All in good time. Despite being gone a year, and feeling the need to catch up on so much all at once, I'm determined to stroll and enjoy the walk, to see and inhale and enjoy the details. Life is beautiful and meant to be savored one rose petal at a time. And believe it or not, I think we're meant to savor the dark moments as well because without them, we wouldn't know how glorious a sunset or a rose in bloom really is.
The skins at October's 4Seasons look yummy on the Slink body. This one came out last year, as part of the holidays, and oh la la, perfect for a bedroom steamy eyes sultry come and get me photo. Uh huh!
Lushish Catz sounds a little naughty, just saying the name of the store. Fun! The appliers work on the Omega, which opens the door for a lot of mesh body application, a separate application for Slink and another for TMP. No matter how you slice it, you end up dressed - or undressed in this case - to entice!
Brii Underground and Playfull Mesh have a HUGE warehouse of ideas and options and this designer must work days, nights, weekends and holidays to create as much as appears on a regular basis. "Til Death" earrings come from a complete outfit. Even if you shop an exclusive number of stores for your work in SL Fashion, knowing a few places to find accessories and tidbits that aren't in that circle of shops might be of value. Every little detail counts.
(I used a photo from The Frick House, Boudoir 1931.2, as part of my photo's backdrop)

I put together a number of outfits today before finally taking a few photos. The learning curve to style and photograph myself in years past seems to have fallen like old buildings unused while I was away tending to medical needs. My hope is, though it's not like riding a bicycle, it will come back to me more quickly than I learned it the first time. 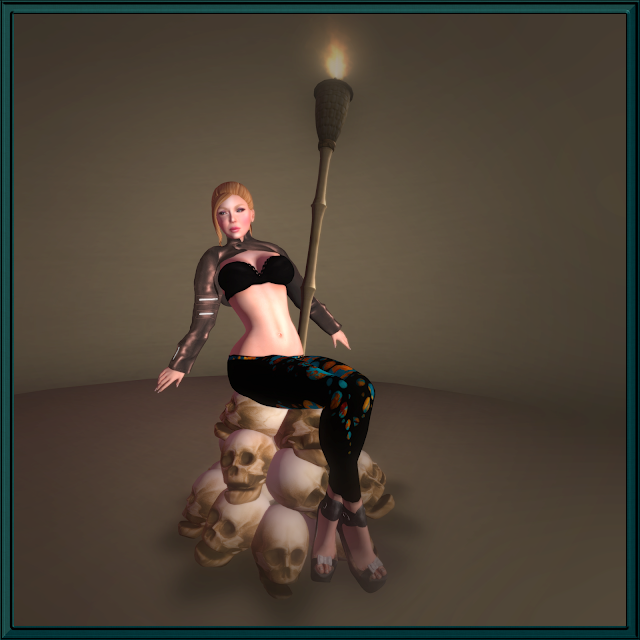 I worked on pictures and stylings constantly for more than three years, and this past year, 11 of the 12 months of 2015, I simply could not. I'm so glad to be back, to be sharing my ideas and putting time and energy into blogging once more. It makes me feel whole. I might look like a 5th grader instead of a college student, on the learning curve where I am now, but at least I'm no longer Rip Van Winkle! 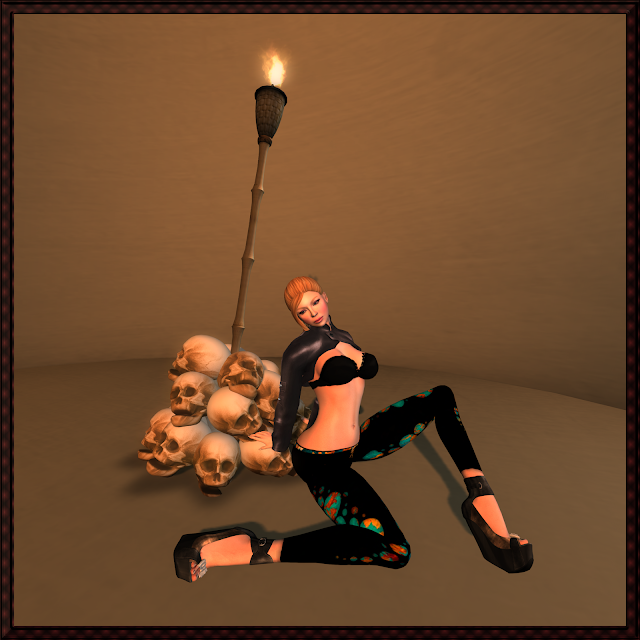 Thanks for making time to read!

Posted by Unknown at 5:34 PM No comments:

One of the things that relaxes me most - shopping in the virtual world of Second Life. A long time ago, I learned that both shopping for Barbie (my dressed up avatar) and styling Barbie could provide distraction and even more, create a small window of a world where I could run and jump and play, yet stay exactly where I was in the world. I've seen several great photos snapped recently in what looked like 'snowglobe' scenes and decided I'd enjoy that immensely. 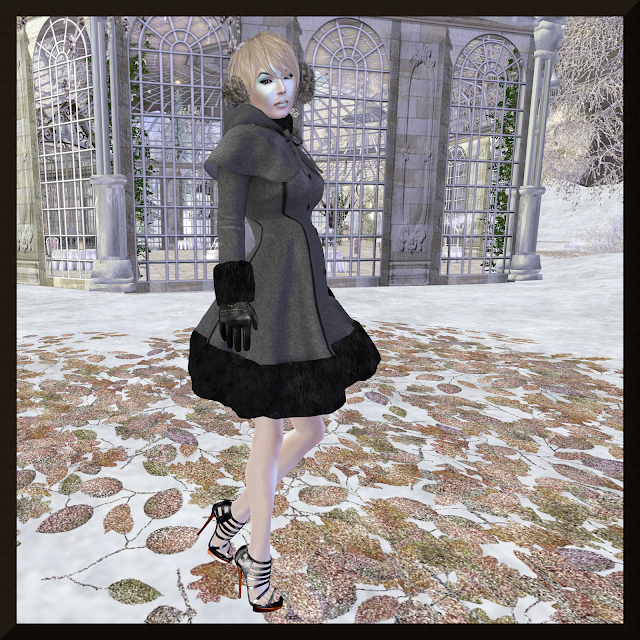 I set out to create a snowglobe feeling, picking the Juliete Coat from JK Style as the basic center of the look. You can get the coat at JK this month free, and free is always good, as a Group Gift and as a gift from the SLF&O group. One coat is grey, shown in the photo, and the other free coat is a wonderful soft brown tint. Adding earmuffs and gloves, from Argrace and Oddity respectively, I was able to bundle up in my little snow world. 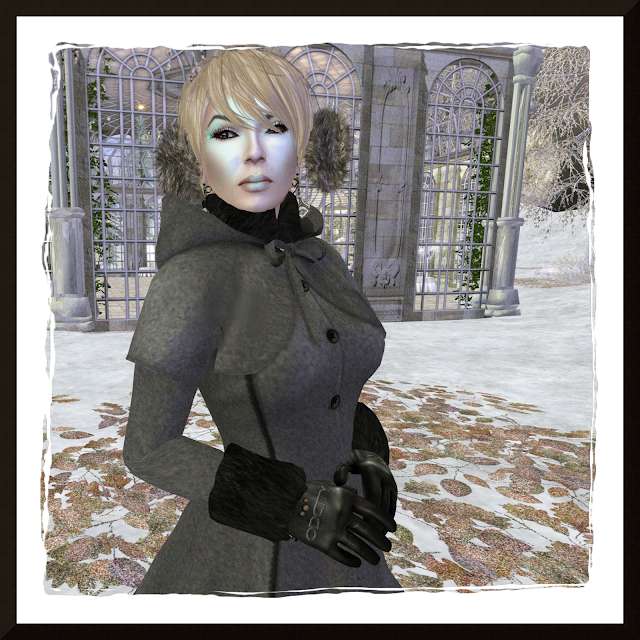 I know it's unlikely to wear sandals with straps in the dead of winter, but I have virtually unfreezable toes in this magical winterverse and the new heels from JK Style had a playful quality to them, also color change options, that I just felt beckoned me to wear them.

It's rare for me to go for fantasy skins but this month I accidentally discovered a place called NuNu's and got 5 different fantasy skins from there for free. This one is called Lumis Lumiere, casting a soft gold and silver tint to the overall look. The color scheme in the background at Let It Snow, on Isle Of Lionesse sim and the tints found in the skin looked like they came from the same artist's brush. http://maps.secondlife.com/secondlife/Isles%20of%20Lyonesse/140/86/25

I took a new picture that I didn't hate. Onward and upward, heave ho! 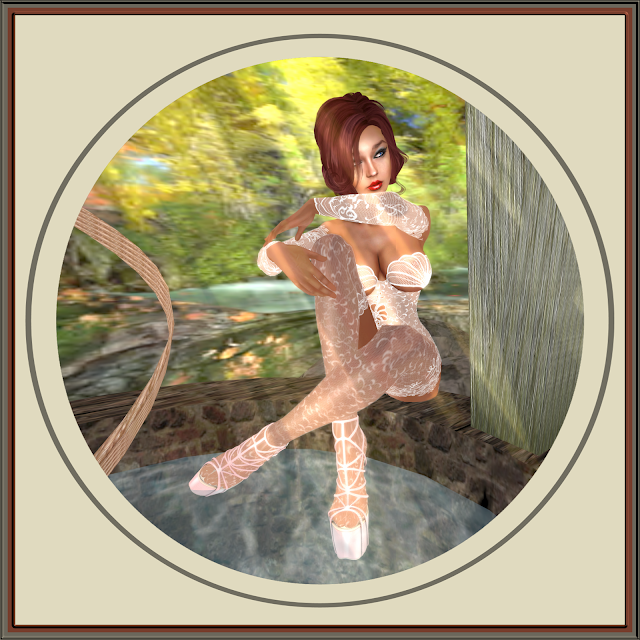 Analog Dog has some awesome FREE balls on their beach. I went there last, maybe this time last year, and it was one free ball. Now there are like 6. Free is always good. This one is Val, in one of the dark red options.

My new favorite purchase - a mesh body - not so free but oh so fun, Slink Hourglass.

October's 4Seasons January Group Gift Capricorn Perfection, well named because of course if it's by October (Keisha Xicotencatl ) it is perfection.

I dropped by Image Essentials to shoot the photo. Kay always makes it easy-er to take good snaps because she's got it all set up for me.

I had a very negative experience with the lingerie designer so for now, I'm leaving that information off of my news of the day.

Posted by Unknown at 7:41 PM No comments: