Many times in Second Life, I travel places and deliberately use the items, clothing, accessories, jewelry and poses designed for the men. Fewer things exist for men only and I imagine that's because there are far fewer of the male population in SL who care to be models and so demand is low for content creators. Those who do create the content for the male gender make great stuff, and sometimes it gives an edge to the female who might perch, because it's new, something no one has yet seen, and that continues to be one of the model's best tricks. See something first, find something new, designs, places, people, and figure out a way to compile it into a useful sales tool that basically sells the brand 'self' - in this case, the brand Caryn. Tonight, I returned to Image Essentials Props and Poses﻿ property and used the Male prop studio. (The women's studio was in use and I knew I could find something as backdrop for the casual outfit I'd just styled.) The studios are great, as are the many photo op locations around the sim for photographers. Every so often new things are rotated in and older things removed. This 'Cowboy' studio set was new to me. It had poses collected by Kay Weston﻿ then creatively applied to the build. One sitting on the fence and one leaning against the fence were created by PNP while the one of me laying in the meadow came from Mystical Lane. 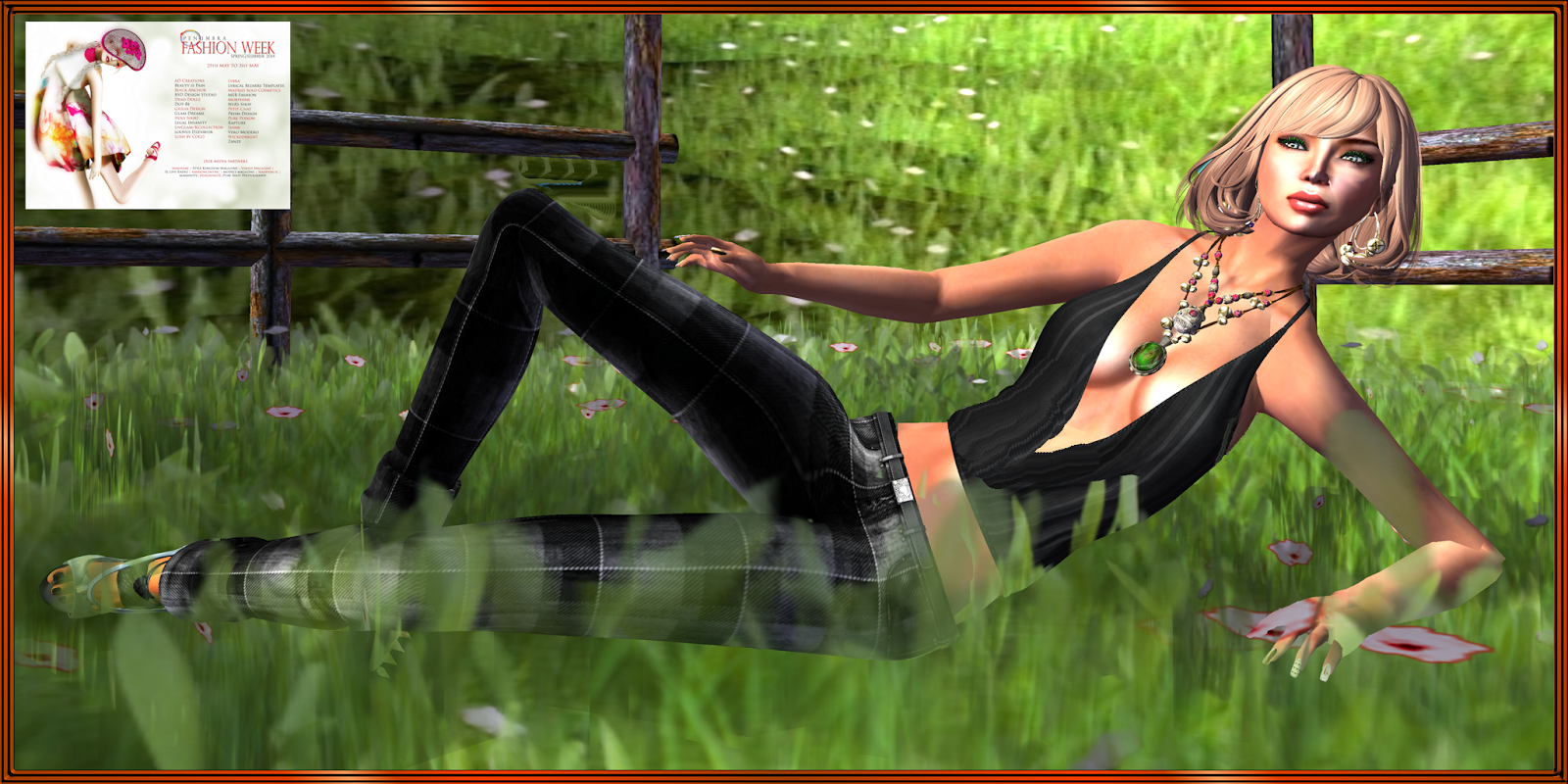 My outfit consists again of items from PENUMBRA Fashion week. I love how the virtual world emulates the physical one, and things like fashion weeks around the world happen in both worlds I love. B.BOS created the Maddy Tartan Pant and [NV] designed the Weiss top. I paired new items from other parts of the grid with these two PENUMBRA creations. {{BSD Design Studio}} continues to make me oooh and aaahh with pleasure because I'm such a shoes and boots fanatic! This pair of grey Supermodel Anniversary Limited heels show just one example of why her designs make me smile! Truth Hair and I have been around about the same length of time in Second Life. I just celebrated my 9th rez day a few weeks ago, and I can remember when only a few designers made hair or shoes or jewelry and I can also remember how vitally different those items then and the counterparts now really were. A very good friend, someone who simply wanted to encourage my modeling dreams gifted me a card for Truth hair so I've been blessed with several new styles and this one is the most recent. I think I like this one because of the unusual name Chilali and how fun and flirtatious it felt; it's perfect for spring. Eve Express was one of my first mentors as I began the journey that brought me to this point in my life, blogging passionately, styling passionately, and passionately interacting in other ways with the fashion community. She took a hiatus, which disappointed so many customers, but each and everyone of them understood that she needed a break, and supported her needs. They just missed her makeup styles. Now she's back, collecting a few 'testers' for her group that try on new looks before she boxes them up and puts them on the sales floor. The new Face Paint will remind you of the old, with all the details very similar, only newer makeup, fresh for 2014 now tempts you. I'm grateful for all the people who paused in their world to help educate and encourage me in my world, and one of those people - Eve. Drop by, see the new products, offer your testing skills, and if you've never met her, nows a great time to get to know her!