When I found this ranch filled with all the pretty colored horses, I smiled. If you do not disable the Adult option on search, Second Life will take you to the most unique places imaginable. Trust me. But after I deselected that option, I found one piece of property that was completely empty, an unknown phenomena to me and then I found this place. 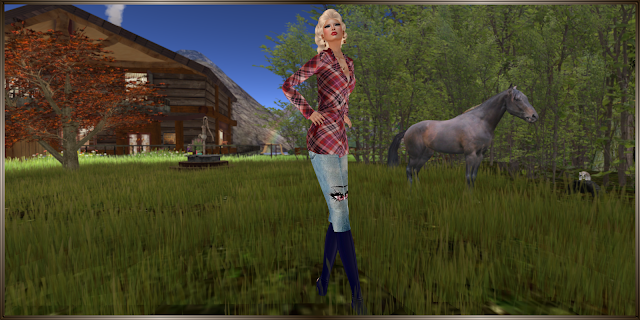 Behind the Caryn in plaid and boots is a southern belle typist who writes from a little nowhere town in South Carolina. As a girl, I cut my teeth on Scarlet O'Hara, reading it with wide eyed imagination, drinking in the raw yet carefully written sexuality, and imagining life in the midst of an adult fairy tale. When I landed on the property at this ranch, those thoughts returned. 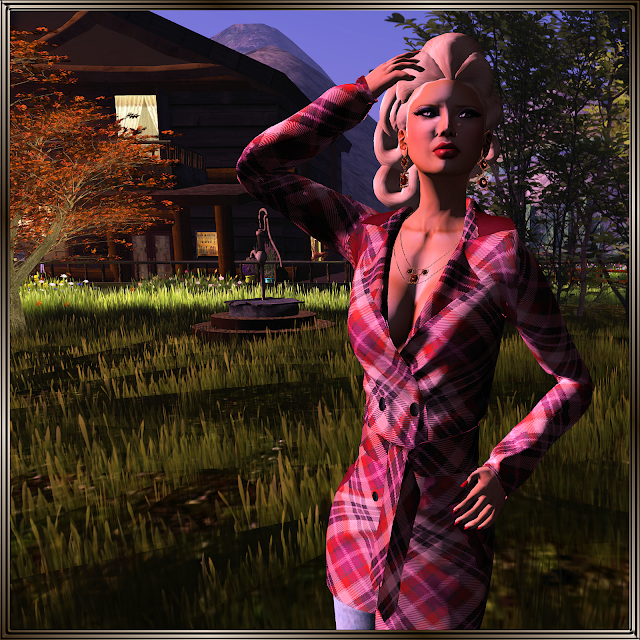 With an amused grin, I realized that I had that Scarlet look. Who would go to a real working horse ranch in couture clothing, or even NICE clothing; it wouldn't have to be couture to look distinctly out of place. So altho plaid jackets and boots remind me of ranch attire, this look doesn't remind me of ranch attire. It reminds me of Scarlet O'Hara impudently accepting the reins and running Tara. 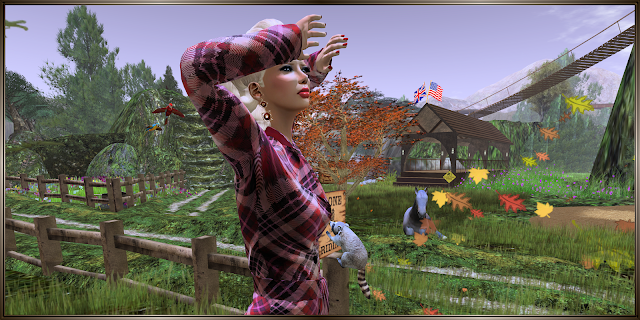 When I found this pose, I was thinking about the attitude of a Scarlet O'Hara. I've got too many things to do today. I will worry about things tomorrow. I have a little of that Scarlet inside me. I've learned to fill my days with things to do so that I distract my mind from overly worrying on things that are beyond my control. Maybe there was a bit that was healthy in that spoiled little girl, and maybe she did eventually grow up. Live! Love! Laugh!

Every once in a while, I have to pause and thank two pose designers. I passionately wanted to blog and I knew that blogging took a certain number of poses. I also knew that poses could range between 10L and 100L per pose. I know how much time it takes to produce them. And I also know I cannot make my own. Just about the time I really knew that I was passionately invested in blogging, both In-Pose and Manifeste Poses set out a Super Mega Huge Pack of poses from their past. I think In-Pose put over 800 poses from Avante Pose - the previous name of the pose store - for around 800L. It was less than 1L a pose. Then Manifeste Poses offered a similar deal. I believe they had a pack with 300 or so poses, also sold around 1L a pose. To this day, I would be lost without those poses. I love the designers who include poses in their packs and share with me new items for blogging. Tremendous creativity abounds around the grid related to posing and pose creators. But for these two businesses, you made my world and what I love immensely more fun. Thank you. My <3 to yours.

A second after note, because I'm feeling effusive I suppose... the jeans shown here are called Denim Eyes. One of my very first SL friends was a friend because she traveled here in 2005 with the rest of a 'family' unit that I arrived on grid with and someone who tapped into the potential of making, building and creating her world. She shared freely what she created. It's one of the oldest garments I still own. They certainly don't have the same modern couture look. Light and shadow and so many changes have affected the artistry of clothing creation since her time. I love coeur Gorky. She was a friend, a sister, someone I just knew. She had a fierce loyalty and a blunt point of view. I pulled these out today in a moment of sentimentality, and pulled them on and had to comment about her and the jeans and the past. Life is good.
Posted by Unknown at 1:02 PM